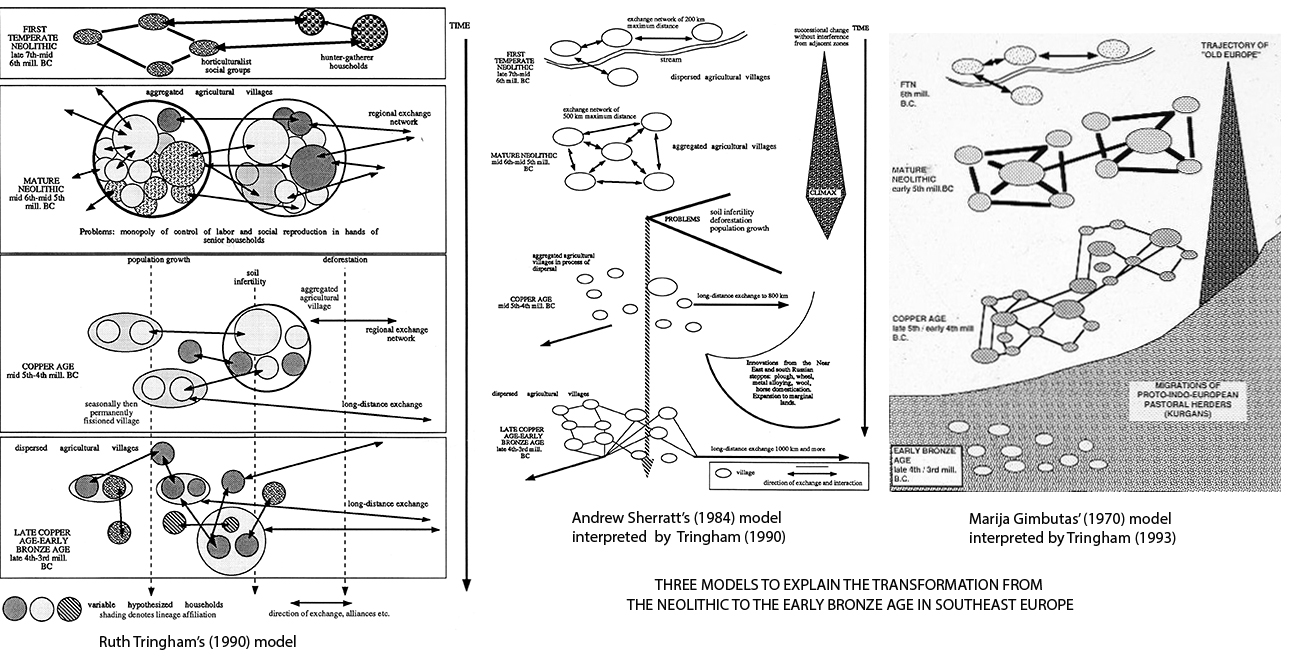 Life after Selevac: Why and How a Neolithic Settlement is abandoned (1992)

This article was written as part of the Festschrift for Yugoslav (Serbian) archaeologist Nikola Tasic’s 60th birthday. He is the past director of the Institute of Balkan Studies in Belgrade and the National Museum of Serbia, a specialist in Bronze Age “migration” in Southeast Europe. Although I don’t agree with his ideas on the latter, I have tremendous respect for Dr. Tasic as a moving light in the modernization of Yugoslav archaeology. The article follows up some of the ideas that I began to express in the Conclusion chapter to the Selevac monograph (1991) about an alternative interpretation of the transformations in the archaeological record that archaeologists refer to as the transtiion from Eneolithic to Early Bronze Age in Southeast Europe.

The  period  of  the  4th  to mid-3rd mill.B.C.  is a period during which urban centers and early states were established in Mesopotamia. Six thousand years ago, the Near East and Europe were demographically, technologically and economically at not such  very  different  levels, but no  cities or states developed in Europe until 3000 years after the earliest examples in the Near East. How does one explain  such  contrasting  paths  of  social evolution? Environmental and demographic factors have been in the past suggested and critiqued as primary causes of the rise of civilization in Mesopotamia. If  we  assume  that,   from   an   environmental   and demographic point of view, both Europe and the Near East had an equal chance of developing an urban pattern of settlement (an  assumption  which would not be found universally acceptable), then we have to  conclude  that  the  development  of urbanism  is the voluntary or involuntary result of decisions relating to social and economic organization of society and the particular historical trajectories of these regions. .

A popular explanation is that  the “old order” of Europe – “Old Europe” – was diverted from its path of emergent complex society by migrating  pastoralists from the steppes north of the Black Sea moving westwards into  the Balkan Peninsula during the same period as state society was emerging in the Near East (late 4th-3rd mill BC).   Within this explanation is the strong underlying assumption that the “natural” path of the evolution of Old Europe would have been towards a complex society and urbanization. My questioning in this article of the pastoral migration from the north Pontic steppes as an explanation for the manifested archaeological changes and inferred socio-economic changes, questions also the legitimacy of this basic assumption. In other words should we assume that urbanism and social complexity would be the inevitable outcome of the adoption of an agricultural  subsistence strategy? I think not! Rather, I suggest here that what we see in Europe until that continent was drawn into the World system of the Roman Empire was a legitimate alternative to that  strange artificial  entity which we call urban life and civilization. The diversion of European society from the path towards “civilization” was not forced from the outside by invasion, but was a deliberately chosen path.

I go on to detail the archaeological manifestation of these changes and their alternative explanation to that of invasion. One of these is the multifactorial systemic model (Sherratt) of the process  of  changes  resulting  from  certain technological innovations (plough, wheel etc.), coupled to a series of subsistence changes and  to  changes in social and political organization .

In this article, I suggest that this process of socio-economic transformation  started much earlier  at the end of the Mature Neolithic, i.e. at the time of the abandonment of Selevac.  The Selevac Archaeological Project, that I directed from 1976-1982, and published in 1990 documented  a change of settlement pattern from semi-sedentary to long-term fully sedentary settlements during the 500 years of the village’s occupation in the Mature Neolithic. The abandonment of the  site of Selevac-Staro Selo after 500-1000 years of occupation  is a manifestation of a continuing process of social and economic change. My model for the abandonment of Selevac is based firmly on the premise that these changes represent essentially a  socioeconomic transformation of the cultures with  no significant external stimuli. Unlike Sherratt, I assigned a more significant role to the transformation of those social relations that encompass the manipulation of materials by humans than  to the transformation of these material conditions themselves. Thus, although the material conditions that demanded  change–for example,  problems in resource availability–may have been present, I regard their role as secondary in the change. The  crucial  point  here  is what kind of factors of social relations did cause the changes in archaeological settlement pattern and other aspects of the record? For the solution to this problem, I move on to discuss the evidence from my later archaeological project at Opovo, that represents the already transformed settlement pattern. Opovo is a small late Vinça settlement that was established on the marginal lands, characterized by poor drainage and intractable soils in direct contrast to the location and size of Selevac..

The abandonment of Selevac and establishment of Opovo are seen as examples of a process of social fissioning that I believe was an important variable in the socio-economic transformations at the end of the Mature Neolithic. I speculate on the nature of the variables that lie behind the social fissioning itself, such as the organization and power structure of society rather than its technological ability to manipulate the  material world. I propose that, by the end of the occupation of, for example, Selevac,  the organizational limits of a social formation that comprised economically autonomous co-resident domestic groups (households) aggregated into a  network of large settlements were reached.  Without some centralizing dominance structure, through which  the households could be organized into an integrated (as opposed to aggregated) political unit, it would have been impossible to continue the trajectory of  intensification of production and growth of population. But such a path  of further centralization was not chosen. I suggest that the solution that was chosen was to  fission the social group.   I hypothesize that at the end of the Mature Neolithic,  the large aggregated settlements like Selevac, fissioned along  household lines and  that smaller hamlets comprising one or two households  were established. Obviously, I am hypothesizing that Opovo is one such hamlet. Such social fissioning would not  have been done rapidly, nor over  long distances. Nor need it have involved a permanent severing of ties with the larger group. We may speculate that such fissioning would not have been carried  out by those at the top of the dominance structure;  it would have been the less powerful members of  a  household  or  less powerful households who were the ones to break away from the rigors of   tradition.

I finally consider many of the other manifestations of socio-economic transformation in addition to settlement pattern within this model and offer the model as a viable alternative to the invasion or technological-resource models. I conclude that in Balkan prehistory, and temperate European prehistory in general,  there was a  preference to maintain the domestic co-resident group (household) as the main unit of social and economic cooperation. The establishment of  small settlements such as Opovo, and the abandonment of settlements such as Selevac, represent a development away from any growth of social complexity and centralized organization toward  the maintenance of the smaller, co-resident, kin-based domestic groups (households) as units of social reproduction.

Tringham, Ruth (1992) Life after Selevac: Why and How a Neolithic Settlement is abandoned. Balcanica XXIII:133-145