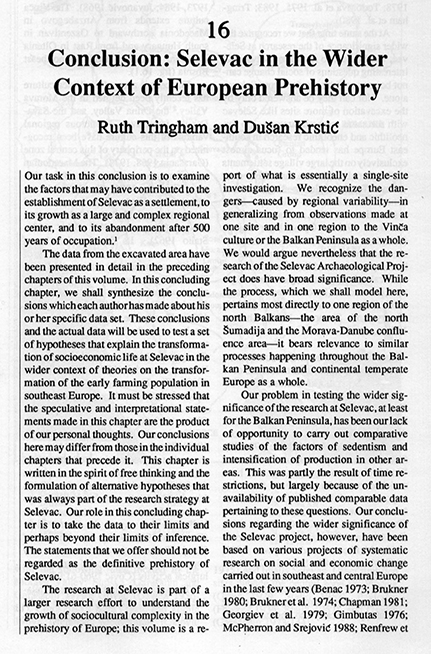 Conclusion: Selevac in the wider context of European prehistory

This chapter was written with a certain amount of hindsight. The Selevac Archaeological Project  was not designed to study changes in social relations, for example, the role of household production, which  requires – at the very least – a wide exposure by excavation of well preserved architectural remains. This chapter, however, was written while I was in the middle of the project at Opovo, that was characterized by wide horizontal exposure of the settlement. Although the authorship of this chapter was attributed to myself and Dusan Krstic, I was in fact its sole author. Some of its content, especially an idea that the transformations in social relations, such as household production, led the early agriculturalists of Europe to establish permanent villages, but prevented them from eventually growing into urban centers, probably made Dusan uncomfortable.

The final chapter of the Selevac book synthesizes all of the data presented in the preceding chapters in the wider context of European prehistory. It is a chapter which claims to take the data up to and  well beyond its limits of inference.  From a discussion on the cultural transformations observed by the Selevac project as well as other archaeologists in Southeast Europe,  the concluding chapter moves to a discussion of the three factors which were hypothesized in the introduction to be important in these transformations. These factors comprise sedentism, intensification of production, and the social relations of production (in particular the role of the household as the primary unit of social reproduction). Each factor is examined in terms of its theoretical role in socio-economic transformation, and in terms of its demonstrated role in Southeast European Neolithic according to  the data from Selevac. The data from Selevac has been most successfully used to demonstrate the increasing degree of sedentism and the intensification of production during the 1500 years subsequent to the introduction of agricultural techniques to Europe. The book concludes, however, that these changes in the relationship of humans to the material world are reflections of the transformation of the relationship of humans to other humans. Moreover the ultimate cause of the changes in the relationship of humans to the material world lies in  the transformation of the social relations.