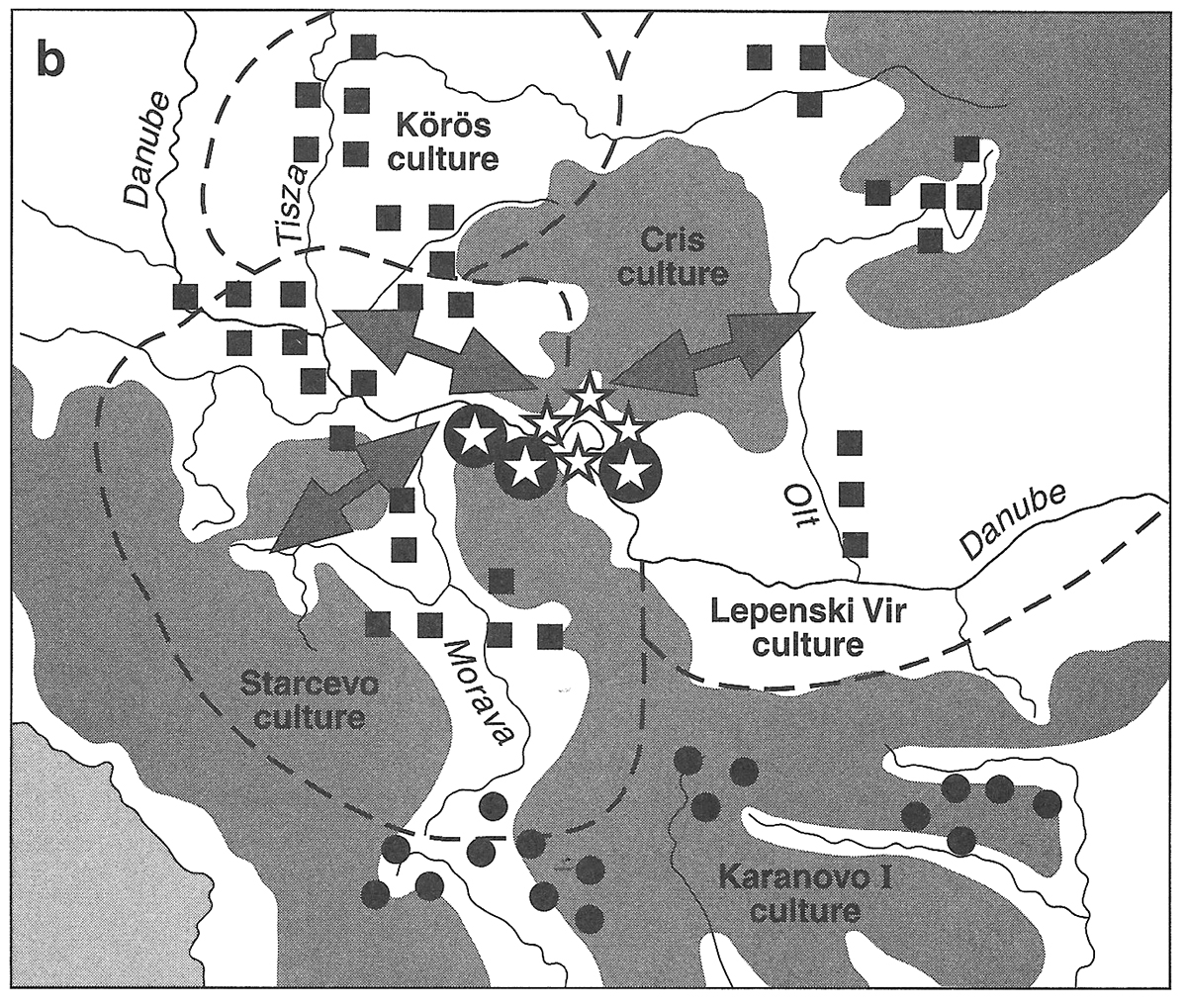 Southeastern Europe in the Transition to Agriculture in Europe: Bridge, Buffer or Mosaic (2000)

This article was published after a symposium organized at the Annual Meetings of the SAA in 1995 to bring together all the new information about the transition to food-production as the dominant way of life in Europe. I was asked to cover the area of Southeast Europe. It provided me with the opportunity to publish ideas and data that I had been wanting to publish for many years, since participating in a conference on the same topic but in a very different cultural context in Köln, Germany, in 1982. When I first presented the argument of an alternative chronological interpretation of the famous Lepenski Vir settlement, I incurred the wrath of the sites excavator, Dragan Srejovic, although this did not affect our friendship. Barbara Voytek and I, wrote about this in an article in 1989, which still met with a lot of criticism. In the context of this current volume, edited by Doug Price, what I am saying doesn’t seem so revolutionary as it did in 1982, especially since Marek Zvelebil is saying much the same in his chapter in the book.

In this article, I argue against any monolithic explanation or visualization of the process by which the transformation occurred. I argue against the idea of cereal farming and sheep/goat husbandry as being a locally developed phenomenon in Southeast Europe (apart from the area of modern Greece). I view the interaction between farmers and hunters/foragers as the key aspect of the Neolithic transition, in which farmers as well as hunter-gatherers were radically and quickly transformed. Obviously, the long-term survivors of this relationship were the farming populations of southeast Europe, but how this happened was far from a simplified idea of farming being more successful aiding the ultimate success of farmers in Europe.

In this article, I examine the archaeological data from the area of the Danube Gorges, including the famous site of lepenski Vir, to demonstrate the nature of one manifestation of the process. Here I argue that the forager.hunters of the Danube Gorges would have had very much the upper hand in any negotiations of cooperation between the two groups, but that this very success led to radical changes in their symbolising, perception and manipulation of their material world and an involuntary (on the part of both parties) but inevitable degradation of their resources. The agriculturalists of the Early Neolithic Starcevo culture of the area surrounding the Danube Gorges were also radically changed by the interaction. The result of the interaction, I argue, is the archaeological manifestation known as the late Neolithic Vinca culture. Farming as the dominant subsistence resource survived and became fully established in this part of Europe, any evidence of hunting or foraging quite disappeared, the Danube Gorges abandoned. The imagination boggles as to “who” in terms of people are represented by the Vinca culture –  survivors of the Danube Gorges hunter-foragers, or survivors of the erstwhile Starcevo culture, or both?

This examination of the Danube Gorges situation leads me into quite a long and complicated analysis of the archaeological stratigraphy of the sites and a discussion of their chronological interpretation. I suggest that the transformation in the Danube Gorges was in a way quite a unique process, and that different situations in Europe of the interaction between farmers and foragers created a mosaic of transformational contexts was created and manifested in the archaeological  data.