On December 5, 1973, the Canadian Broadcating Corporation (CBC) staged a debate in Toronto between Ruth Tringham (archaeology professor at Harvard University) an Erich Von Däniken (author of Chariot of the Gods (1970) and Gods from Outer Space (1972) and Gold of the Gods (1973)) in their The Great Debate series. The topic of the debate (moderated by the well-known author and TV personality Pierre Berton) was whether the Gods from Outer Space Theory is a Fantasy. At the time of the debate, Erich von Däniken was at the height of his popularity with 14+ million readers worldwide. His imprisonment for fraud for a year in Switzerland in 1970-71 provided an opportunity to write the Gods from Outer Space and does not seem to have slowed him down at all. We barely had time to do more than be introduced to each other before the debate; I did not see him afterwards. The debate lasted for an hour, after which the audience was invited to vote on who had won. Fortunately, a slight majority voted for me! When you listen to the audio file you can see if you agree!  His “star waned ” during the 1980s. Interestingly, the debate with me in Toronto does not figure in any mention in his biographies or books or anywhere on the Internet. It is as if it never happened. But see the one exception below (Bill Rathje in 1978).

In the photos on the left, Ruth Tringham and Erich von Däniken appear as they did in the debate in 1973. Except that I was wearing a fabulous bottle green velvet trouser suit!

The debate was televised, but at least this audio recording is available. I was sent it by CBC on a reel-to-reel tape! Thanks to Nico Tripcevich, whose mother had a reel-to-reel tape recorder, I managed to digitise the tape to a WAV, and then mp3 file. 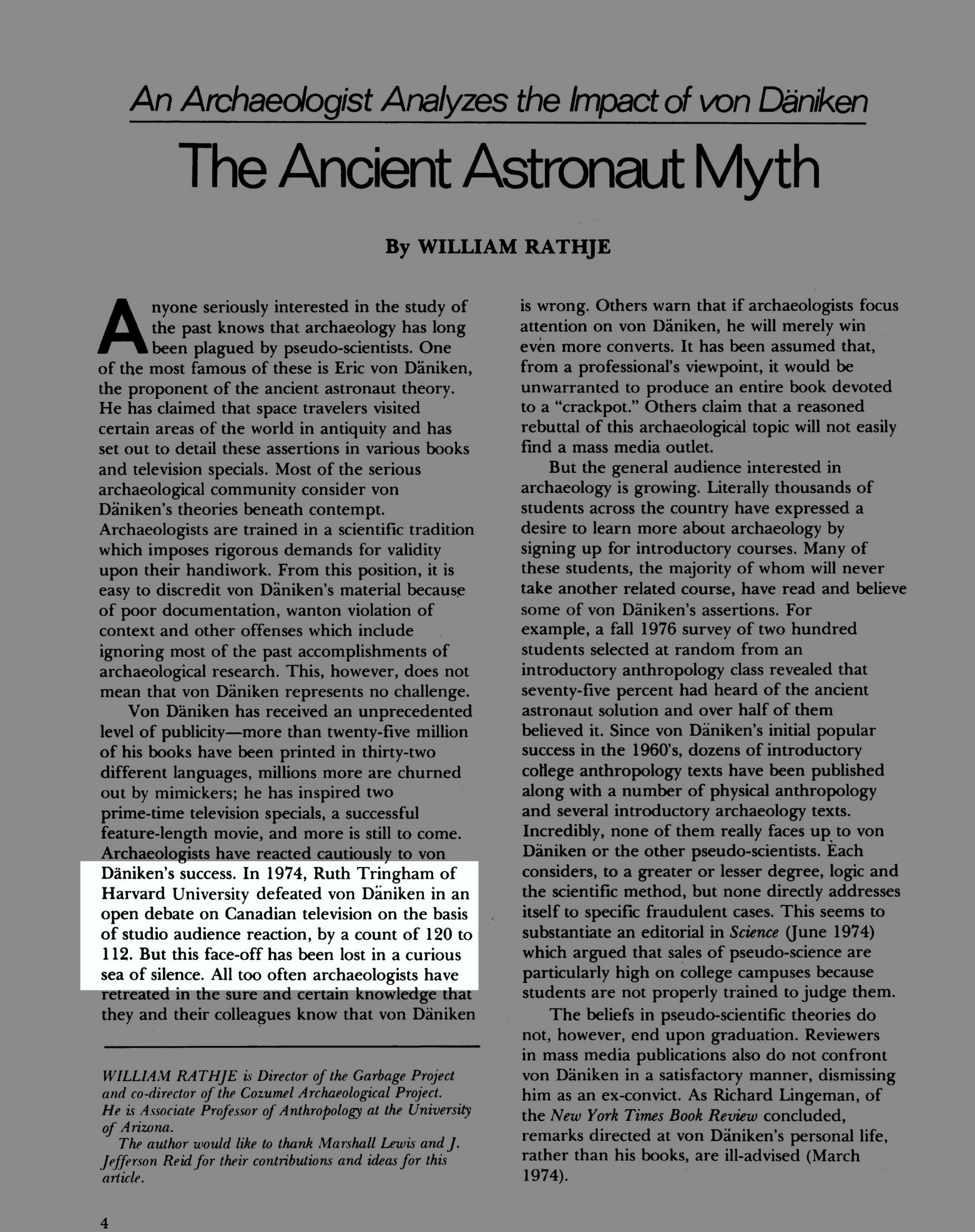 The one mention of this debate was in 1978 in the pupular magazine Archaeology by the great Bill Rathje:

In this article he writes (p.4): “Archaeologists have reacted cautiously to von Däniken’s success. In 1974, Ruth Tringham of Harvard University defeated von Däniken in an open debate on Canadian television on the basis of studio audience reaction, by a count of 120 to 112. But this face-off has been lost in a curious sea of silence.”